May 1, 2015 - Posted by: Ramses Delafontaine - In category: The History Manifesto - No responses 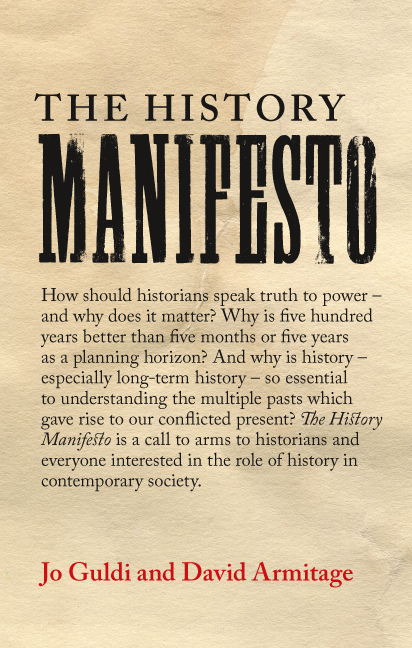 By Drs. Ramses Delafontaine, FWO Doctoral Fellow at Ghent University; Reviewing for the International Network for Theory of History [INTH]

The Manifesto advocates a return to the study of larger time scales to overcome an alleged epidemic of short-term thinking. The Manifesto argues that our society and the historical profession are plagued by an attitude of “short-termism”. The authors state that in political as well as in economic decision-making the gains have to be imminent, lacking any long-term strategy to tackle the contemporary challenges facing mankind and our planet, namely climate change in the Anthropocene (G. & A., 64-73), international governance (G. & A., 73-79), and widening inequality within and among nations (G. & A., 79-85). The authors argue that due to this focus on the ‘short past’ historians are having trouble with truth-finding, falsifying of ideological and political arguments, providing relevant policy and political advice, and demonstrating the ‘impact’ of historical research. To overcome all the challenges facing historians, the Manifesto proposes a two part solution: (1) a return to the longue durée in order to reverse the trend of the short past by “moving towards larger spatial scabs for understanding contemporary challenges” and (2) a restoration of the historical discipline as “engaged academia” and history as a guide to public policy and politics (G. & A., 37). Guldi and Armitage tackle important subjects for historical research such as long term perspectives, big data, digital methodologies, and a call for a more engaged and socially critical historical practice. The Manifesto advocates in essence that a return to the study of longer time scales is pivotal for an engaged and critical historical discipline.

Debate in the American Historical Review

The Manifesto has received a lot of negative comments on its interpretation of data by Benjamin Schmidt on the time scales covered in doctoral dissertations during the twentieth century. Armitage and Guldi maintain that there was a clear shrinkage of research-time scales during the twentieth century and that only in recent years historians have returned to studying larger time scales. The critique by Deborah Cohen and Peter Mandler in the exchange [freely accessible] that was published in the last issue of the American Historical Review noted that “there is much more continuity than change across the twentieth century, and if anything, longer time scales had become more, not less, common as of 1986.” The introduction to the exchange in AHR confronts a concern about this empirical kerfuffle. “Some of the dispute here is empirical in nature, hinging upon divergent conclusions from “big data” sources of books, dissertations, and journal articles. But how reliable are these –that is, as titles- as an indication of the chronological scope of these works? … There are rewards and pitfalls in the realm of big data.” Guldi and Armitage in their reply –supplemented with new figures which are also liberally interpreted- stick with their arguments despite clear indications that they are not entirely supported by their own data. The Chronicle of Higher Education reported that several historians had questioned the ethics with which Armitage and Guldi used and interpreted their data. Armitage and Guldi responded by claiming that the article by the Chronicle was reported and presented poorly. The Chronicle based itself on the debate in the AHR, in Annales and the work done by one anonymous blogger who has gone through the Manifesto with a magnifying glass. Cohen and Mandler note that the Manifesto uses “forced arguments about the short-termism of academic history” because “they needed to invent a crisis of short-termism in the discipline in order to point clearly toward the advantages of the longue durée.” With terms describing the Manifesto’s arguments as simple and deceptive, bewildering, and far-fetched, the critique accuses Guldi and Armitage furthermore of ignoring evidence an making absurd distortions. Understandably that Guldi and Armitage in their reply state that Cohen and Mandler write as “hanging judges.” Yet the critique drives a lot of its arguments home. The problem lies at the heart of the Manifesto: namely does a longue durée perspective automatically ensure social engagement by historians and does the longue durée equally ensure that the content is relevant for policy makers or for the broader public? Clearly it does not, each research topic requires its own time-scale and its relevance will be determined by its subject, the quality of its research, the eloquence of its writing, and the manner and target audience of its publication.

The History Manifesto leaves its readers hungry for more. The argument for the longue durée could have been argued better with less attacks on micro-history. The Manifesto is too rhetorically conceived to go into great depth about (1) big data and historical research as well as (2) engaged historical research’s connection with the longue durée.. (1) The big data component is too narrowly presented in the book, thereby leaving out historical researchers who do not have access to huge chunks of data nor any of the difficulties and serious challenges big data confronts us with. (2) The engaged historical research component in the Manifesto is so concerned with replacing economists it forgets that public historians and historians in general have been  dealing with the challenges of engagement and advising roles in policy and public issues for decades. But most importantly the issues on the interpretation of their empirical data have undermined their own arguments on the connection between relevance and the longue durée, as opposed to irrelevance and shorter time scales. The Manifesto’s most remarkable feat is its publication in open access which has brought about a larger discussion amongst historians, who have brought a lot of content to the debate. The impressive international resonance which the History Manifesto has received online as well as in the American Historical Review and in Annales. Histoire, Sciences socials is a hopeful sign that historians are eager to have a continued debate on research methods and the goals of academic history. Historians have valuable and legitimate knowledge to share with the public. But doing longue durée historical research will not automatically bring historians to the forefront of policy making or public debate. In order to achieve true engagement historians will have to seek out different skills and attitudes to engage (to a greater extent then what is now the case) with a broader public and to weigh in on public policy and be truly engaged. So I feel strongly that I should part by letting Braudel himself have the final word: “Ces pages sont un appel à la discussion.” Without debate no discipline can survive. The Manifesto has sought and found controversy amongst its readers, and historians should welcome it.